If you like to find new, interesting, out-of-the-way places, we found one last weekend. We went with Cyndi and Bill to a little town in North Carolina called Bath. So, if you consider I went to Bath, England in 1994 and now to Bath, NC, I’ve had two baths in the last twenty-seven years! Not bad. 😊 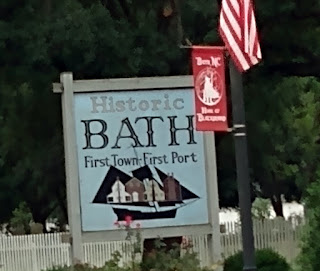 We read about Bath, NC in the AAA magazine and decided to check it out. We left this past Sunday and drove east for a little over two hours to Washington, NC where we spent the night. In the morning, we drove fifteen miles to Bath on the Pamlico River.

Bath is a tiny town in Beaufort County incorporated in 1705. The town is less than a square mile in size. Six-tenths of that area is water, leaving only about three-tenths of a square mile for the town. The population in 2010 was 249. Not a lot of people, to say the least!

So what sets Bath apart from many other small towns? Just this:

Bath is the oldest town in North Carolina

Bath, in colonial days, was the capital of North Carolina

Bath has one of the oldest surviving homes in the state, the Palmer-Marsh house, built
c. 1744

And finally, Blackbeard the Pirate, a/k/a Edward Teach, lived in Bath for a time.

Now that’s a LOT of history for one tiny town!  We wanted to get out and walk the sidewalks and have a chance to read the many historic signs posted; however, there were no sidewalks so we drove slowly down the three streets and took what pictures we could. 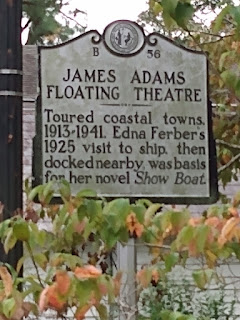 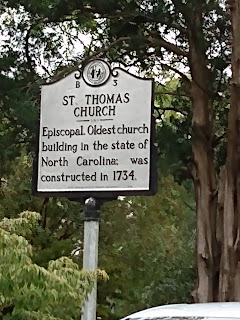 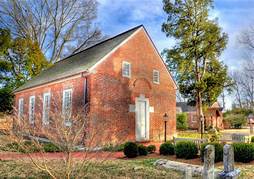 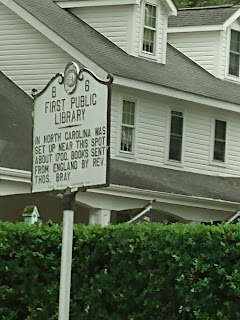 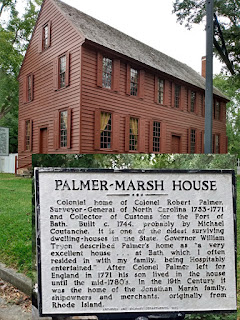 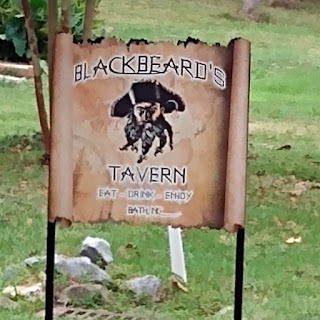 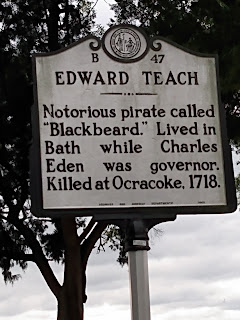 After leaving Bath, we stopped at various country stores on the way home. I purchased home-made raspberry jam at one store, a pumpkin at another, and odds and ends at yet another.

So if you live in this area and want a nice ride, go for a Bath!

Quote of the day: It is a blessing for a man to have a hand in determining his own fate. Blackbeard

Posted by Linda Loegel at 5:27 PM No comments:

Warmed Up and Miked Up!

Hello everyone. It’s been two months since I’ve written on this blog. Wish I had a good excuse, but I don’t. I have been busy writing my new novel and loving every bit of it. I had an exciting experience about our 9/11 book which I’ll tell you about in a minute. My book, Redeeming Rob, won a Firebird Award. And then, Stewart and I actually got to go away for two days.

It took a village to get us to the Outer Banks, but we did it. His granddaughter Dana and her boyfriend Ezekiel loaded up the car and truck, along with Bill. We had to take a scooter, wheelchair, walker, rollator, bag of medicines, luggage, etc. I took less when I had two babies and had to take diaper bags and furniture in order to go anywhere! 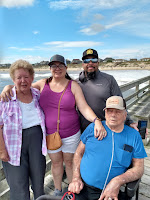 Dana drove their rental car with me, and EZ drove our truck with Stewart and when we got to the Comfort Inn South Oceanfront on Nags Head, they unloaded everything and carried it up to our room. Their room was just one floor down from ours. We went out for breakfast both days, but at night they went out to get dinner and brought it back to our room. And, of course, when it was time to leave, they carted all our stuff down to the vehicles for us. It would have been very difficult indeed to have made the trip without them! 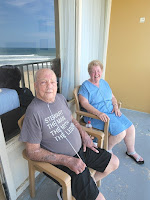 Stewart and I spent most of the two days sitting on our private balcony watching the waves roll in and out and listening to the ocean’s roar. It was pure Heaven! I did manage to read a few chapters of the book I’m currently reading, by Mike Lindell called Against All Odds, From Drug Addict to CEO. I very much recommend it. 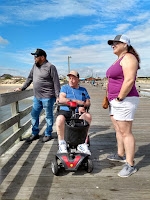 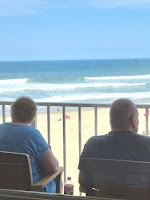 On our last day, we packed up and drove to a pier where we inhaled the air, sound, and sights of the ocean, talked to the fishermen, and then ate breakfast at an outdoor restaurant on the pier. Wonderful, wonderful time.

Okay, I told you I did something else very exciting this month. I was on TV! Along with four other writers in our writing group—Ellen Kennedy, Nancy Panko, Terry Hans, and Jim Lewis. We talked about our group project, 9/11 That Beautiful, Broken Day. We met at Ellen’s house with Scott Mason of The Tarheel Traveler television show and his cameraman. Scott talked with each of us, had us read our contribution to the book and discussed our feelings about that historic day. One at a time, we got miked up, the camera was aimed at us and we talked for about fifteen minutes each. This was a whole new experience for me. Scott’s show lasts five minutes which means he had to condense an hour and a half of recorded time down to only three minutes. And may I say he did an excellent job! Hopefully, you can click here and see the show that was aired on September 9.  https://www.wral.com/tar-heel-traveler/17382329. Scroll down to the September 9 program headlined: Twenty years later, authors pour heart into reliving September 11 through their books.

Posted by Linda Loegel at 6:32 PM No comments:

Email ThisBlogThis!Share to TwitterShare to FacebookShare to Pinterest
Labels: Outer Banks, Warmed Up and Miked Up
Older Posts Home
Subscribe to: Posts (Atom)